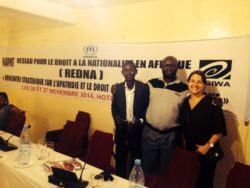 The Citizenship Rights in Africa Initiative (CRAI) is saddened by the loss of Adam Hussein Adam, who passed away Friday 5 August 2016 after suffering a heart attack. Mr. Adam was a courageous advocate against statelessness and a longtime partner of the CRAI network.

Mr. Adam’s engagement with the issue of statelessness was grounded in his own personal experience of exclusion. Mr. Adam was a Kenyan Nubian, descended from a group of Nubians transported to Kenya from Sudan by British colonial authorities. Under Kenyan law, Mr. Adam and people like him, are Kenyan citizens, but they are often discriminated against and in practice are often unable to get documentation of their citizenship. In Mr. Adam’s case, he was told that he would need to present his grandparents’ birth certificates in order to obtain a passport. Eventually, after a number of years, Mr. Adam passed before a vetting panel at the Ministry of Immigration and received his passport.

Mr. Adam did not, however, stop fighting once his own situation was resolved, and instead he used it to intervene on behalf of others in similar situations. He set up an organisation called the Centre for Minority Rights Development (CEMIRIDE) to document and fight against discrimination faced by Kenyans. The organisation dealt with similar issues for a number of communities, including Nubians, Somalis and Makonde (whose ancestors migrated from Mozambique).

In 2008, he travelled to South Africa on behalf of the CRAI coalition to investigate xenophobic attacks which had recently taken place there. That mission formed the basis of the report “Tolerating Intolerance: Xenophobic Violence in South Africa.” Later, working with the Open Society Institute for East Africa (OSIEA), he worked to change Kenya’s citizenship law among a wide variety of other projects.

His death is a tragic loss not only to his young family, but also to the community of activists with whom he worked to prevent and address statelessness.